Here I am, Forest Dawn Featherston, just one and three-quarters months away from turning forty. I’ve observed and pondered the cultural norms surrounding American women and this milestone. I find them odd.

I am not dreading turning forty. I do not feel past my prime. I do not feel the need to reclaim any youth. I have lived. I have sought. I have soared, and stumbled. I am proud. Proud of the woman I have become in two score trips around our magnificent sun.

I suppose quite a few things about me are cliche for thirty-nine. I have a child and a dog. I am regularly in bed by 9pm. If I stay up late, it’s likely to binge watch dramatic TV series alone on my sofa. My shoes are now sensible flats. I’ve taken up writing.

For this last revolution of my thirties, I vowed to pull off  my masks. Lay down the self-imposed mantle of perfectionist chameleon, and retire the poker face. It hasn’t been easy just standing bare in front of myself. Or recalibrating.

I guess a new Forest is, indeed, dawning.  And I invite you to follow my journey, wherever it may lead.  END_OF_DOCUMENT_TOKEN_TO_BE_REPLACED

An especially synchronistic occurrence bonded a group of students in a writing workshop last month. Some extraordinary women shared their work with me, so that I might share it with you. Unedited, copied and pasted. 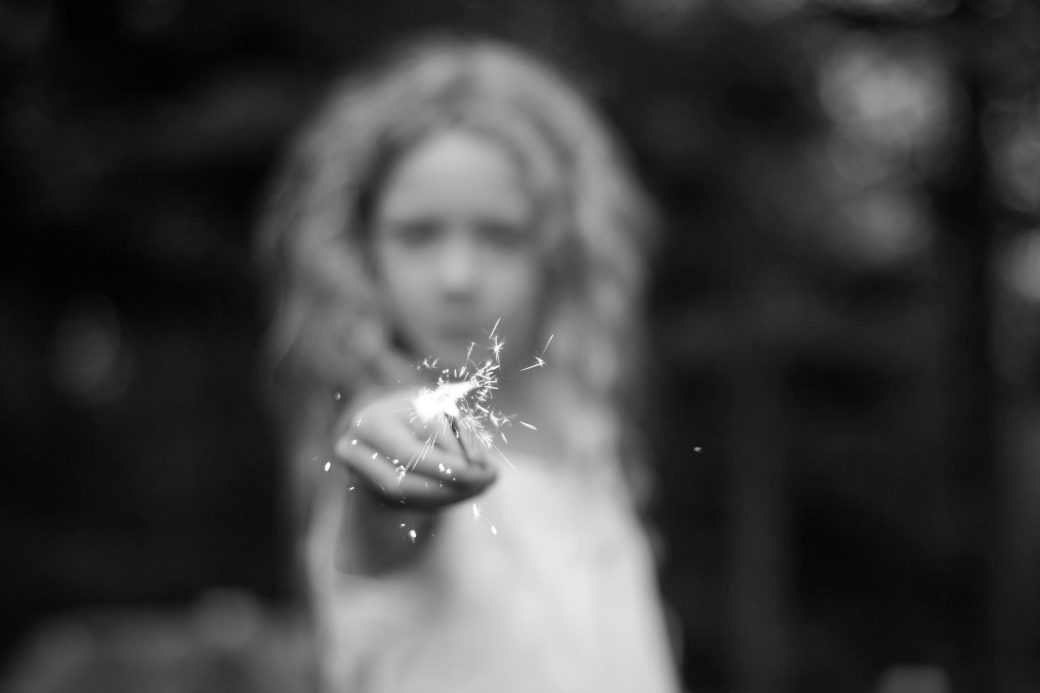 It was an ordinary writing exercise for my Personal Essay workshop at Writers, Ink in San Diego.  The workshop was held in a small art gallery and halfway through I asked the four women in the workshop, age ranges from what I guessed were early thirties to “seasoned” like me to take a few minutes to look at the art and choose one of the paintings or photos for a short on-the-spot essay.

They walked around, looked, sat down and began to write.  After ten minutes, I asked them to stop and read to the group what they’d written.  The first writer did this after letting us know she’d chosen a photograph of a child, a little girl with a sparkler.  The second writer said she’d, coincidentally, chosen the same picture.

It turned out that all four of these women coming from very different places and points of view – and with many pictures to choose from – had chosen the girl with the sparkler.  In my years of teaching writing, I’ve never seen this happen, but it did.

Each of the pieces was quite different from the others and each piece was a delight.  But more than just a simple assignment, this writing exercise and their mutual attraction to the photo created an unusual “first meeting” bond among the women.  It was a joy for me to see this happen.  And I hope you feel that same joy as you read the four essays here, written quickly and with power.

The photographer liked the story about their choices and gave permission for them to use it with this post.

She points her finger right towards me and it is a reminder of my mother with the same gesture warning me to behave.  A lot of good it did.  I learned to ignore it and go on to do whatever I pleased.

My late husband used to point his finger at our kids.  One day he saw them imitate the action towards me.  He lifted his finger in their direction.  He stopped and gasped. Needless to say, he never did it again.

Unfortunately this finger pointing stuff is all too prevalent today.  It always seems to be someone else’s fault about the ills in our society—it is the liberals, the conservatives, the environmentalists, the disillusioned, the know-it-alls, Big Business, small business, laziness, overzealousness, aggressiveness, timidity—let’s pint a finger toward them.  Do we ever stop to reverse the direction?

I wonder what it would be like if we first pointed or looked at ourselves before going outward.  How would this affect the choices we make?  What would be the impact on our lives, on the world in which we live?

I think it is time to examine our personal behavior and actions, seriously think about what we believe and what we can do about it, take action or make an effort to examine how we act.  Point the finger to yourself in front of the mirror.  Take stock of what you see, articulate what you want to do, listen to your inner and outer voice.  It can be personal action or interaction; communal movement or world-wide, who knows.  Only you can make that choice.

When your list is done, in your head or written down, turn to someone, point a finger and say, “Join me,” or “I am sorry” or “Let’s see what we can do together.”  Create your own sparks!

I like the idea of a sparkler. Even more than the idea, I like the picture I’m seeing of a girl holding one.

She’s no longer a toddler and not yet a teenager. But she is directing it, pushing it, wanding it from the present where she stands now to the future forward to where any viewer looking back at her is. There’s no apology. It’s hers. She has it and it’s out there for all to see pointing in the direction of her choice.

I like the idea that already at her young age that she is facing forward, facing the future, facing the lens on the other side, unblinkedly. And, she’s doing so with a source of primal power in her fingertips, in her reach, in her grasp.

I like the black and whited-ness of the picture and the little itty part that isn’t exactly just white. It’s the ignited ember at the end. It’s the spastic spark that has the energy to burn brighter than white.

I like that some thoughtful person on the other side of the lens wanted to show this girl as holding mystery and magic and a bit of mayhem, too. Is she the spark the photographer sees? Is the ember in the foreground really the energy in the background? Is that energy what it will take to move her through life from girl to miss to ma’am?

It caught my attention. And it caught the attention of my husband, too. It was here last Friday night when he stood before this photo and smiled. He smiled at it at the memory of holding such as sparkler himself.  He smiled at being in this room, full of people he didn’t know, but full of something he wanted to know.

The room was full of an experience his wife was trying to have. To express herself. To be among others who like the sparkler can combust in a way that sparks something new. To get aglow again and to face the future with what—a  pose, a stare, a wick that is lit. At first in her writing, then in her life.

At least that is what she is attempting to do.

Only my sparkler is a pen. Its pictures are paragraphs and those paragraphs are stretched across pages instead of canvasses.

I’d like what I write to have the mystery, the magic, the mayhem at the end of this point. I’d like to hold the pen and see it alight and send embers off the page – perhaps a smoke signal that it will be okay despite all evidence to the contrary. I’d like for it to be stood before and considered, smiled at and to ignite something in someone somewhere to warm them by the fire of it.

After all, what else is a sparkler to do?

The girl held the sparkler like a gun, straight at me.  Straight at me, shooting sparks at me as if she were casting a spell.  The look on her face was intense, focused.  It caught me off guard.  I didn’t expect it – that feeling that I was somehow being attacked, shot at.

Because how often does that happen in America, or as some would say now Ameriker?  How many children, some even toddlers, hold that gun like a sparkler, pointing it out, aiming away, concentrating to pull that trigger?  What will happen?  Will a bullet really come out?  Surely, it isn’t loaded.  Surely someone wouldn’t leave a loaded gun where a child could find it, could shoot it, could kill with it.  Surely not.  We’re too smart for that, right?

But those guns are keeping us safer.  We carry them in our purses in case someone tries to rob us.  Why that kid with the sparkler, maybe she is shooting that light at us to warn us.  Maybe she’s not so innocent, maybe it won’t be an accident.  Maybe next time, it will be a gun.

This girl, this intensely focused girl.

Concentration? Wonder? A scientific mind dissecting the mechanism? Or has she spaced out? Is she thinking about what happened at school today? Solving that math problem? Wanting to redo that conversation with her crush?  Or is she Hermione Granger, using her intellect and focus to channel her strengths into powers that help her friends and heal the world?

I already see every day the signs that the world is shaping my little firecracker. She is large. Not in stature- she is a 50th percentile, average little two-year-old peanut. It’s her aura that’s large. She commands her space, she goes for what she wants.  Her extraverted kindness insists on bringing joy to all in her space. She finds the troubled kid.  She stares down the unknown mean, yelling Dad at the playground, protecting his son and questioning the man with her eyes. She radiates warmth and seems to want all around her to feel as joyful as she does.

But she is a girl in patriarchal America. Someday, people will start putting out her light. Heck, they already do. When she’s solidly climbing at ten months old, parents gasp and try to correct her. Admitting, “If she were a boy we wouldn’t worry. Boys wear their bruises with honor, but we worry about girls.”  I do not worry about her physical bruises. I worry about her emotional ones what will come when society tells her she can’t or shouldn’t.

Who will dim her light? Will she relight her sparkler and trudge further onward, focused on channeling her strength and light the way for others? Or will she sullenly stand by and watch as another firecracker lights the night?